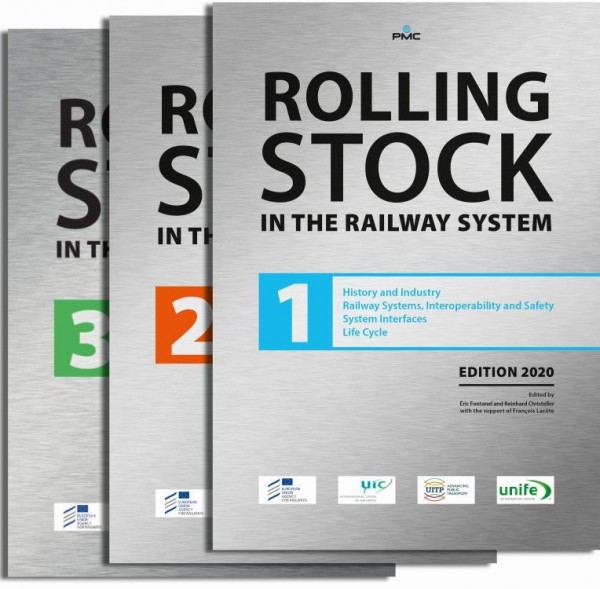 Preis gilt für Band 1- E-Book only. Weitere Varianten
"Rolling stock in the railway system" is a technical book in three volumes intended for industry professionals as well as railway enthusiasts.
The work was written by engineers from several major European companies and of seven different nationalities. It takes stock of the modern techniques applied to rolling stock, while placing it within a rapidly evolving railway system, following the opening of the European borders.
The first volume of the three volume work acquaints the reader with the railway world and railway rolling stock by a historical approach (chapter 1), followed by a description of the railway system (chapter 2), and an analysis of the management of the system by reference to the European directives for interoperability and safety (chapter 3). This later chapter has been deeply amended as compared to the first version published in French, to take into account the putting in force of the so-called “fourth legislative railway package” by the European Union. The work continues with a technical analysis of three key interfaces between rolling stock and infrastructure (chapter 4) and then by a presentation on the mastery of the life cycle of a railway vehicle (chapter 5).
The second volume describes in its first chapter (chapter 6) the technical characteristics and architectures of trains, depending on the transport service delivered (tramways, metros, suburban, regional, intercity and high speed, freight), a specific section being dedicated to industrial design. The following chapter 7 is dedicated to on-board “mechanical” sub-systems (comfort and related internal arrangements, structures, guiding systems and coupling), specific sections being dedicated to passive safety.
The third volume deals with all systems that control the operations of the train. A first chapter (chapter 8) is dedicated to traction systems (electric traction and thermal traction), and a second one (chapter 9) to braking systems and air production, then chapter 10 deals with train control and monitoring. Another chapter is dedicated to all systems when embedded in locomotives (chapter 11) and chapter 12 describes the driver’s environment. At the end, chapter 13 gives some hints on what might be the technical features of rolling stock in the near future.
Alle Artikel von Fontanel, Éric; Christeller, Reinhard (Hrsg.)